Viewing most recent comments · Next page · Last page
Winterkry17 days ago
This game really managed to make me think really hard with its ending. Even after finishing it I’m still left with more questions than answers, and that’s a good thing.
Reply
TheMan22 days ago

this game really brought back a lot of memories i wish there was more non horror PS1 style games like this.

I need answers. What do you do with the second odd star? It changes the fishs proportions. And what then? I feel like I've tried everything many times. I need to know if there is a secret ending.

It was a really fun platformer, especially the floatiness of the jumps feel surprisingly fitting to the game's world. I think it could use more of a game ending well... ending as I did everything but I still ran around looking for what I still can do only to find out that I finished the game already :)

Just finished this game, I really loved it.

A dying world dismantling in front of your own eyes,while once was a paradise in a fantasy world.This is Iketsuki,a platformer that was heavily influenced from Dark Souls.

The atmosphere that they created with the setting being the post apocalyptic dying world is fantastic and very rare in the itch.io community.

Once was a life giver to a paradise,the Starseeds,are waiting you to collect them and use them in the fish pool getting illumination from the big shining orb.Then feed it to the Lovecraftian creature Numen.

Despite world map being small and plot being so simple,that definitely makes that game feel much more major than it seems like.It accomplishes that with only 2 interactable character and I love that part.

Gameplay is kind of repetitive in it but I understand it points out to that only being a small experience.If they were to make a bigger game from it though it could have been much better in my opinion.

Hello, I played this game and I really enjoyed it, finding the seeds was really fun and I managed to find all of them which was neat, good work :)

I can't have enough of Modus Interactive games. This was a beautiful experience to play. I can easily see myself lovingly thinking about this the entire upcoming week, just as it happened with Sanguine Sanctum lmao

I did get stumped on what to do with the odd starseeds, so I ended up coming here to see the comments for help, and I assume they were likely meant for an ending that was scrapped? It's too bad, I felt really clever when I figured out one of the odd starseeds makes fish change shape lmao

I had this game on my hard drive for like 1,5 years. Completely forgotten, I once launched it when not being able to sleep and wondering what the name might stand for. Found myself in an amazing crazy world that will stay with me for years. Beautiful stuff!

Years on and this game still haunts me with its implications. I feel unfulfilled without the alternate ending you've teased. Surely you can find time to come back to this project and give all of us long time fans some proper closure?

If you're like me, you've always enjoyed breaking out of bounds and trying to find things that the devs might've hidden away or forgot about.  Seen here is:
(1) Behind Numen's Arm     (2) Above the Temple's Moon hole 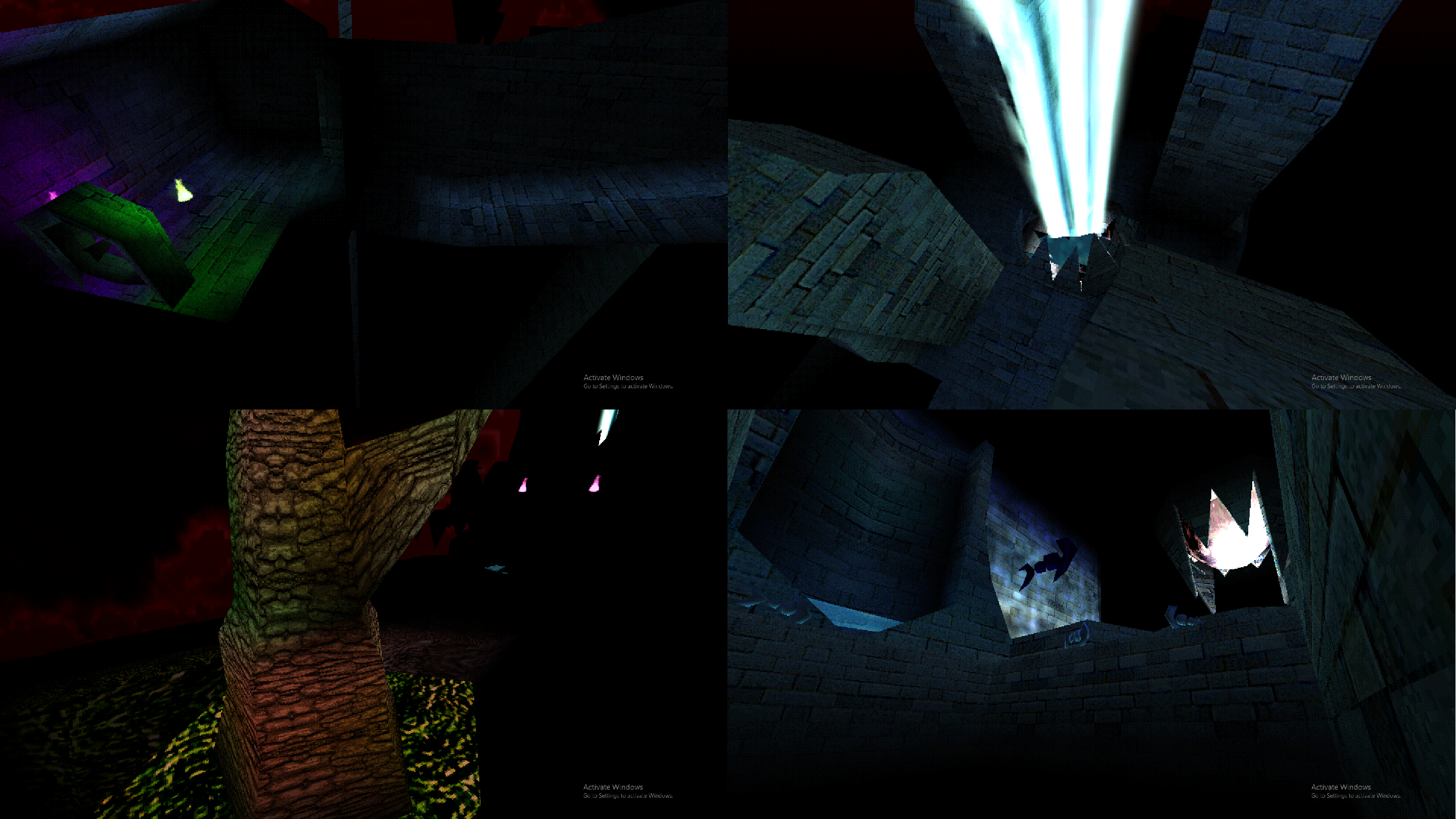 I would love to know more about the development of this game.  Specifically, was the Pool Pit originally planned to serve some sort of purpose?  Same with the Rupee-shaped indent in the wall next to it, was that originally intended for something?

I also hope to see this game expanded upon someday, maybe to explain more of the lore.  Like what the weird moving growths were on the terrain in certain areas, why there's plant like objects that're shaped like viruses, and what sort of event is happening with the energy-looking beams being sucked into the moon.

This is so cool! I love out of bounds stuff like this and I think this is the first time someone has done it to one of my games! I didn't even know you could reach these places.

I had some plans for alternate endings that I scrapped for time, and one did involve the pool pit. The indent on the wall was always just for decoration. There was a waterfall in there originally, but I liked it better without.

I would like to expand on it some day, but I currently don't have any plans for it. Thanks for playing and I really enjoyed these OOB screenshots!

Praise you for having an auto-run option, that alone makes you the most competent developer on this site. Awesome, beautiful game! Loved the sound-effects!

Amazing game. I liked every bit of this. Congrats and keep it up!

...and here is Part Two of my play-through.

Again, had a lot of fun with this game.  Part of me wishes it had been longer, but I like that it's a truncated, abbreviated time in a world on its way out.  That seemed fitting.  I also liked not knowing what the #$%@ was going on most of the time, and just getting enraptured in that.   Good time all around.

Don't let the video fool you.  I fell a lot, I ranted a lot, but I actually had a lot of fun with this game.  I loved the idea that I was walking the remnants of a world just on the cusp of doomsday.  Not horror in the traditional sense, but the strange mix of serenity and dread had a profound effect on me.  Really enjoyed it overall.

Here's Part One of my two-part play-through.

Where do you come up with this ideas?

This game is good and it's kinda sad y'know

I know this is 3 yrs back so i made a video about it so enjoy but i recomend playing it.

Very good and atmospheric. I like it a lot.

Weird random bug: Both this game and Frontier Diver spin the camera wildly in an upper-left direction while I have my Dualshock 4 plugged in.

The Dualshock 4 has no stick drift issues and was sitting face up on my desk completely untouched at the time.

Absolutely a great game, I could play this for hours. Everything from the sound design to the graphics are really nice, and the story was not what I was expecting!

Which developing program did you use? Loved the game death

I figured this would be atmospheric and spooky (it is!!), but I never thought it would hurt my heart :'( I gotta commend any game that hits me as hard as that ending did, well done

this game is so wonderfully beautiful, i enjoyed every bit of it even though i did get stuck for a little with not knowing how to make the red fish. i love all your games and hope to see more to come :)

Spoilers for the games ending over here -

Mad in love with this game and its PSX-esque graphics even though I *really* wanna know the function of the ''odd starseeds'', the ending hit me harder than it should have. I can't antagonize anyone in there, Numen really felt regret for whatever it had done that lead to the fall of their world. That curse as Anahel had described it - Could also had been an attempt at somewhat keeping the world alive, even if that attempt itself failed. And in the end, the kindness it showed to the player in response to their kindness - Was what got them ultimately killed, what made me feel even more regretful afterwards - But was it a wrong choice?

Also, bonus points if you play the game while playing Aqua's theme from Kingdom Hearts Birth by Sleep.

This is one of the better games ive played in a while. Incredible job!!! I'd love a part two, or at least to see more like this in the future.
However, I would like to see more details in the story. We had to collect th "odd" star seeds but did they even have a purpose?

I love love, LOVE the zelda ocarina of time vibes in this game it felt like I was actually playing something like that! But the story is very good and everything is perfect! I loved the ending. Very content with the way it turned out. I love this game ヾ(≧▽≦*)o

I've collected a red and a blue starseed and now I don't know what to do . .

First, You are gonna want to put a starseed in the glowing blue orb in the castle thing then wait for it to spawn a little blue ball into the water then you wait for it to become a fish then you take out a starseed by pressing the "I" or the "O" key (I can't remember which one so try both I guess) And then drop it by clicking but make sure you drop it in front of the fish so the fish can eat it and then you just do that with every starseed that the thing in the room asks you for   I hope this helps! If not then try to look up a walkthrough

I figured it out already with the help of a youtube video, but thanks anyway ^^

ive actually played this over a dozen times i really like this one. ples make more stuff like this ples.

Loved the game, so I made a speedrun of it! Unfortunately, OBS didn't record the audio :/